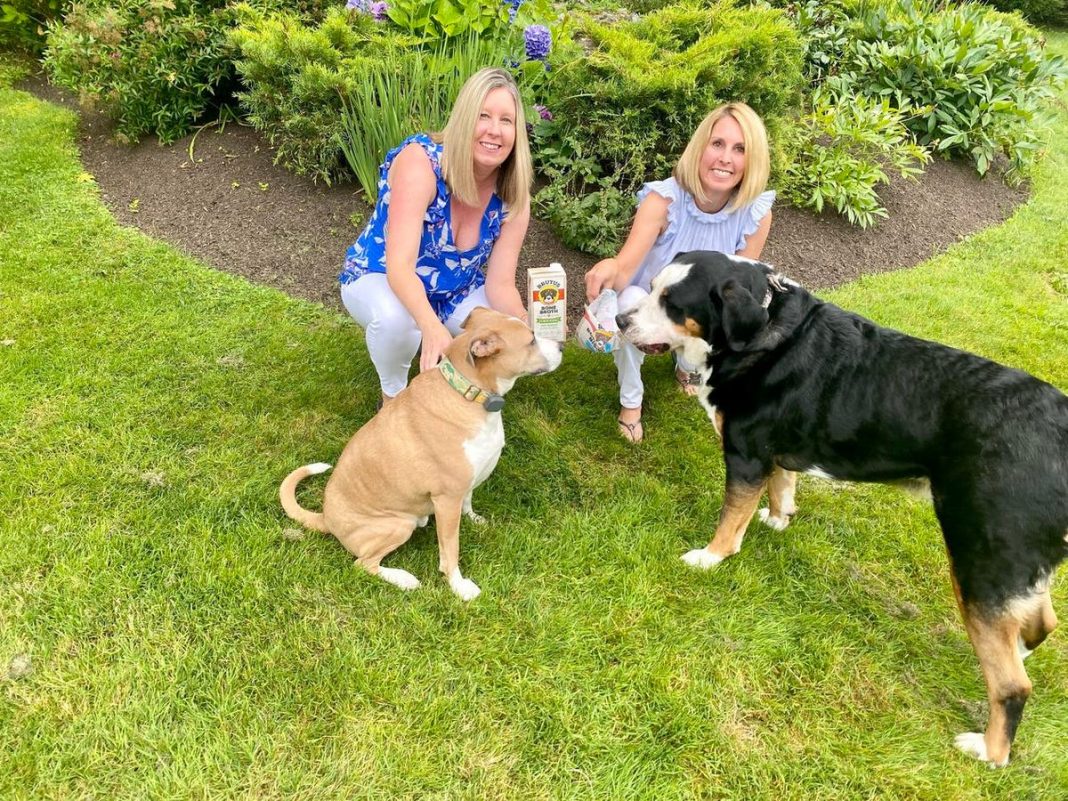 Entrepreneurs are problem solvers. They see a hole in the market and fill it. Creating a new pet food product for two entrepreneurial sisters was just the beginning of the business and life challenges they would face.

Sue Delegan rescued a dog from a high-kill shelter. “He had been abused, had mange, and didn’t have any fur on his head or face or chest,” she sighed. “His name was Brutus.”

Even before it was trendy, Delegan’s mother always made bone broth. When Delegan visited her mother, she made Brutus bone broth and poured it over his food. He loved it!

Years later, on Thanksgiving in 2016, Delegan’s sister-in-law asked, “How is it that Brutus is still kickin?” People always asked what Delegan was doing for him and why he was so healthy and happy. “Grandma’s bone broth,” she would always reply.

“Can you buy it?” asked her brother, who at the time owned a large food company. Delegan responded, “No, I make it.” At that time, bone broth was not popular and it was not shelf-stable. It was hard to find and, if you did, it was expensive. “You should bring it to market,” her brother declared.

Delegan called her sister, Kim Hehir, who was living in Hawaii at the time. She had a strong business background.

“What do you think about this idea?” asked Delegan.

“Let’s look into it,” replied Hehir.

They dug into the market to understand if there was an opportunity. The market was characterized by big pet food companies, such as Purina, or small mom-and-pop shops that couldn’t scale their products. None produced an affordable, nutrient-rich, tasty, high-quality broth that people could add to their dogs’ existing diet.

Pet ownership was on the rise and they noticed that grocery stores were expanding the pet food aisle to take advantage of the trend. “People were spending more on their pet food than their kids’ food,” stated Hehir. “We found out that foot traffic for groceries was much higher than in pet boutiques. People visit a pet boutique once or twice a month and grocery stores once or twice a week. People want convenience.”

Naysayers thought a high-quality product should be sold in pet boutiques. “[However], one of our core values is the belief that you shouldn’t have to be a millionaire to feed your dog with high-quality food,” said Hehir. “Whether you feed your dog kibble, raw, dehydrated, or home-cooked food, bone broth is something owners could add to every dog’s meal,” said Delegan.

You may ask why owners don’t just feed their dogs Swanson, which is so much cheaper. With garlic and onions in it, it’s harmful to dogs. Brutus Bone Broth is also low-sodium, has glucosamine for joint health, and turmeric to fight inflammation.

They partnered with a manufacturer that produces food products for restaurants and hunger relief. The company formulates and manufactures broth for starving people in Third World countries. It infuses glucosamine and chondroitin into Brutus Broth, which is really hard to do. These infusions differentiated the sisters’ brand from the competition. They are the only pet food company that works with this co-packer.

In 2018, Brutus Broth partnered with Wegmans Food Markets and Big Y World Class Market in the northeast to do a beta test. Just before the launch, the sisters got tested for the BRCA2 gene mutation. They did this because their father had had cancer, had the BRCA2 gene mutation, and there was a strong prevalence of cancer in his side of the family. The news was not good for either of the sisters.

Even so, they continued with Brutus Broth’s launch plans. Delegan had a double mastectomy. Three months later, Hehir had the same surgery. Friends and family urged them to put a hold on the business and focus on their health. For them, that wasn’t an option. The launch kept them excited about moving forward rather than dwelling on the surgeries.

Personal challenges continued for Hehir. Two weeks after her double mastectomy, her husband had a stroke. Then her son tested for severe dyslexia and had to switch schools. “We had so many negative things going on in our personal lives that the business gave us something positive to focus on,” she said.

As the saying goes, “what doesn’t kill you makes you stronger.”

The beta test lasted for about 18 months. Wegmans and Big Y represent two different types of customers: One catered to an affluent demographic that was more likely to be aware of the benefits of bone broth and the other was feeding their dogs kibble. They tweaked the product and its pricing to appeal to both groups.

The sisters expected there to be a ramp-up period after the launch. There wasn’t. For a new pet food brand, selling four units per week is considered good. Pretty quickly, Wegmans reported selling eight units a week per store.

Data revealed that 30% of buyers were new customers to those stores and their average cart spend was higher than existing customers. The product performed better if it was in the wet food section versus dry food or treats. Customers reported that Brutus Bone Broth was helping their dogs feel better and they were now refusing to eat food that was not drenched in the broth.

Even with solid sales, problems still arose. Much to the pair’s chagrin, they discovered that how you list and describe your ingredients is regulated and varies from state to state, requiring customizing the packaging. The sisters went by the book and made many, many packaging changes. Correcting and customizing packaging was costly.

“We launched nationally in Target in March 2020,” said Hehir. “It was the week the shut-downs began.” Bone Broth has really good shelf appeal, but now no one would see the packaging. People were shopping online and the sisters needed to pivot. At first, they thought digital marketing was the solution. But, with a small budget, they couldn’t compete with companies like Purina, which have huge marketing budgets.

Instead, the pair started working with micro-influencers. Given the positive feedback from customers, the two figured that once influencers tried Bone Broth, they would talk it up. They did! In addition, the sisters provide food to animal rescue organizations and shelters, as well as, coupons which are distributed to adoptive owners.

When problems arise, use your network. They’ve only been part of the Tory Burch Fellow program for a few months. “It’s been great to just connect with other women who, for example, are in Target,” said Hehir. “We share different tactics on how small companies can stand out.”

To that Delegan, adds “persistence, passion, and relationships are the words I live by.” When she hears “no,” she translates that to “no, not now.” She then strategizes and goes back in.

What strengths and resources will you draw on to overcome challenges?