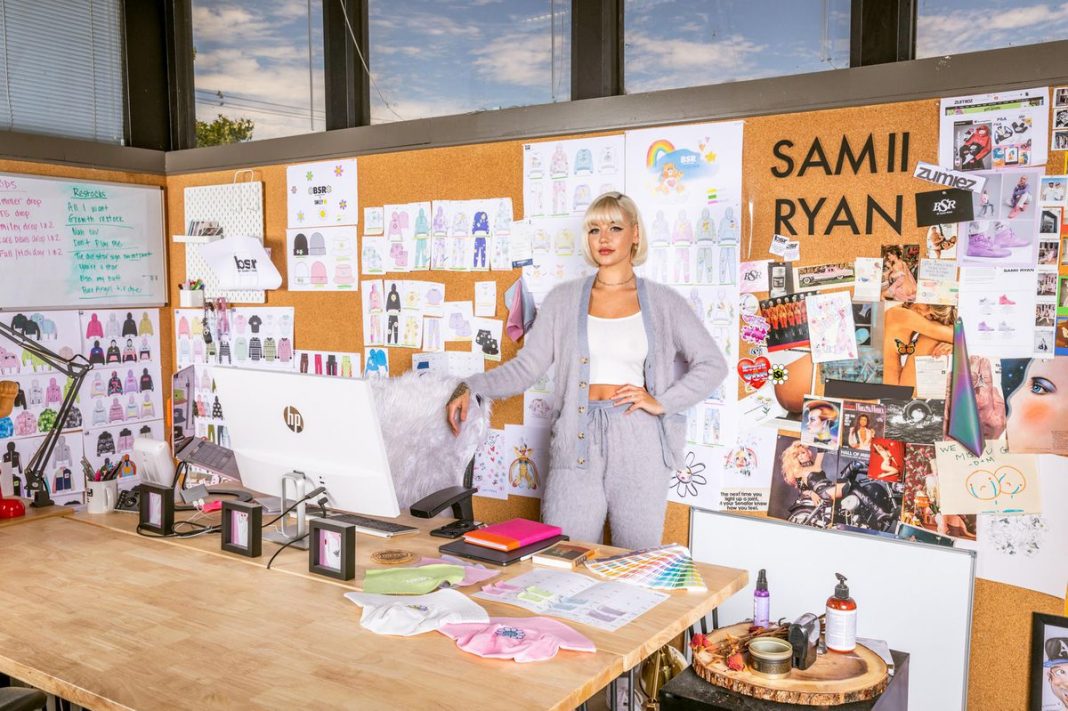 As Americans have traded cubicles for couches and suits for sweats, Samantha Franz’s business has been booming. The 29-year-old founder and CEO of sweatsuit brand By Samii Ryan made $4 million in revenue in 2020, up 650% from 2019, thanks, in part, to stay-at-home orders and a laundry list of celebrity clients including Addison Rae Easterling, Hailey Bieber and Lil Nas X. She’s capitalized on pandemic-era nostalgia with her ’90s-inspired apparel, becoming a near-millionaire in the process, but she’s not wistful for her own childhood.

“I went to public high school like everyone else. I was in cheerleading and soccer, but me and my family were actually living in a homeless shelter,” says Franz, who made Forbes 30 Under 30 list in 2021. “After my parents got divorced, we went in-between homes pretty much my whole life. It was kind of like Hannah Montana.”

Desperate to lead the life of a normal suburban teen, the Bethlehem, Pennsylvania-native hid from her classmates that she, along with her mother and two sisters, spent a significant part of her middle and high school years living in homeless shelters and sleeping on friends’ couches. After graduation, she went to the local community college to become a dental hygienist, a profession, she thought, that would help her become self-reliant. To pay her way through school, she hawked feather earrings to fans of Jack’s Mannequin and 3OH!3 at the punk rock festival Vans Warped Tour, sneaking backstage to gift jewelry to musicians like Victoria Justice and Kesha.

Franz also waited tables at Barley Creek Brewing Company in Tannersville, Pennsylvania. During one of her shifts, an On Air With Ryan Seacrest interview with Kesha came on the radio, and between quips about her recently released party anthem, “Tik Tok,” she sung Franz’s praises as the designer of her signature earrings. Within minutes, Franz was overwhelmed by orders for her handmade earrings, including  one from Nordstrom, who wanted to sell her wares in 40 stores. She immediately dropped out of college, moved in with her boyfriend and started her company from her father’s basement.

“When I said, ‘Yes, I can do it [to Nordstrom].’ I don’t think they knew a 19-year-old was running the company,” she says. “I had no idea what I was doing. I was just trying to have this little accessories brand.”

After selling nearly 10,000 pieces and making $200,000, she put her business on the backburner after a breakup with her then-boyfriend and moved to Los Angeles to try her hand at modeling landing on the cover of Inked and in the pages of Playboy and Maxim. In 2015 she met Evan Pinstein, a buyer for streetwear brand Moose Limited (and her now fiancé), who encouraged her to relaunch her company as a clothing line. She took his advice and two years later designed a line of rose-emblazoned T-shirts that she pitched to Zumiez—the retailer bought 60 stores’ worth of shirts. Six months later, By Samii Ryan was stocked in all 650 Zumiez stores.

“The secret to her success is her ability to just keep adapting to changing customer tastes,” says Melissa George, a divisional merchandise manager at Zumiez who has facilitated the By Samii Ryan-Zumiez partnership since its inception. “Whether its tie-dye, butterflies or mushrooms—whatever’s resonating with our customers—she makes sure that her graphics have that, and our customers just love it.”

Though the average age of a By Samii Ryan customer is between 18 and 30—a prime demographic for e-commerce—direct-to-consumer sales account for just 25% of the business. Wholesale partnerships with Zumiez, Revolve, Dolls Kill and the Hundreds accounts for the rest, with the majority of sales being made at brick-and-mortar stores. (Her apparel has proven so popular among Zumiez customers that several employees have tattooed her face on their bodies.)

But the athleisure market has never been so crowded. Countless retailers—from Balenciaga to Prada—have launched their own lines of athletic apparel in response to the pandemic, and activewear accounted for 40% of all online sales in 2020, with category leader Nike making $37 billion. Yet, Franz has carved out a small but impressive space of her own, differentiating her business through partnerships with companies like Care Bear and Smiley. Though these brands are almost twice her age, Franz keeps collaborations fresh by releasing a limited supply of exclusive merchandise every Friday (a practice common among e-commerce businesses) and promoting them to her 357,000 Instagram followers and TikTok networks. This Friday, she’ll be launching a line of pastel floral sweatsuits in collaboration with footwear marketplace Sneaker Politics; last week, she expanded her product line, releasing a collection of dresses, overalls and scarves with artist Dessie Jackson.

As pandemic-related restrictions lift and people leave their homes, they may choose to leave their sweatsuits behind, too. Franz, who is expecting her first child with finance Pinstein, remains optimistic. She plans to triple By Samii Ryan’s revenue this year and form partnerships with international retailers. “We are a volume brand,” says Franz. “We know how much we’re capable of selling, and we do continue to hit those numbers every month.”