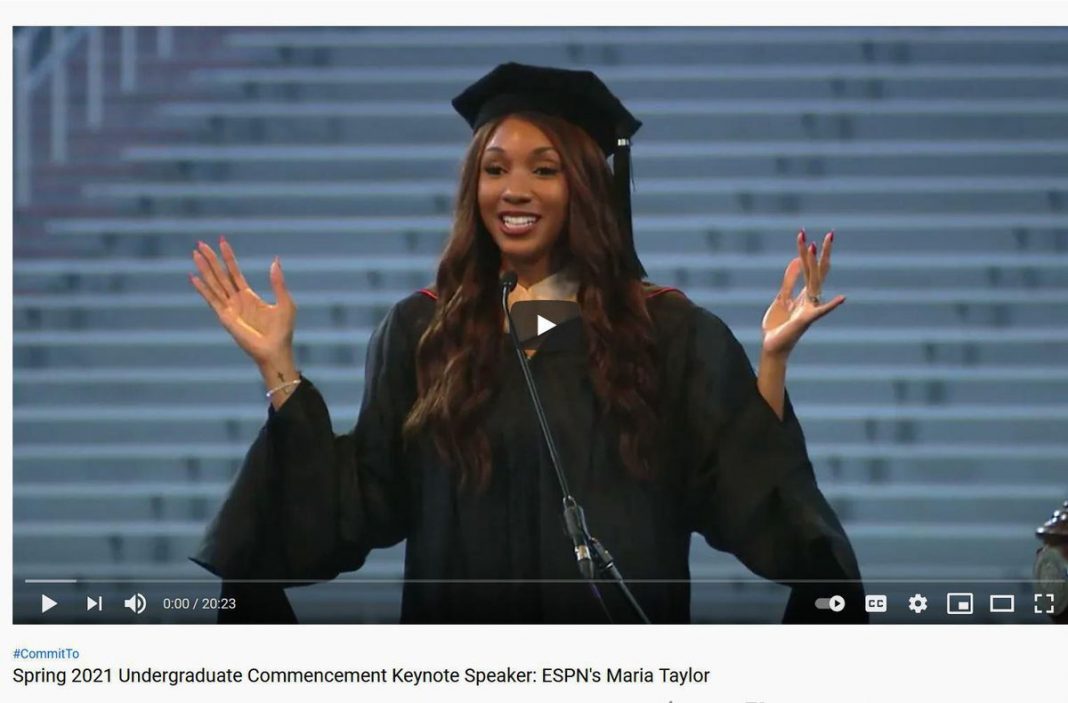 When Lavonia Matthews graduated high school a year early in the 1950’s, she wanted to attend the University of Georgia (UGA) in Athens, Georgia, but was not allowed to due to the color of her skin. But, her granddaughter says, Matthews still revered the place and wanted her children and grandchildren to attend it one day.

Matthews joined the Army and after her tour of duty was over four years later, started her own trucking company. Her company even helped build the infrastructure for Metro Atlanta, according to her granddaughter. Before she passed away, Matthews was able to see one granddaughter graduate UGA in 2009.

On May 13, 2021, the 60th anniversary of the desegregation of UGA by Charlene Hunter-Gault and Hamilton Holmes, Matthews’ granddaughter gave the commencement address to the UGA class of 2021: Maria Taylor, a top sportscaster on ESPN, who choked up as she revealed her identity amid applause. This, Taylor told the graduates, is her grandmother’s legacy.

Then, Taylor asked, “what will be your legacy?”

One of four “guideposts”

Legacy was one of the four “guideposts” or “principles” that Taylor said she lives by and suggested the students do as well.

Another guidepost of Taylor’s is “truth,” telling the story of how she finally found the career that resonates with her – journalism and specifically sports journalism, because she was an athlete – after trial and error at UGA taking other courses.

“And I’ve realized over the course of time, that being true to yourself and speaking your truth is the greatest gift that you can give this universe,” she told the graduates.

The power of story, perspective and good work

Through the power of her own story of doing minor reporting early in her career, and then being “discovered” by an ESPN executive when she didn’t realize it, Taylor demonstrated how to see the bigger picture, and to always do your best even when nobody’s watching.  It brings to mind the Steve Jobs work ethic of making the inside of the computer clean and neat too, even though no one will see it.

“If you’re living in your purpose and you’re true to that purpose the opportunities will come. The doors will definitely open. People will speak on your behalf when you don’t even know that they are,” she said in her commencement address.

Then she added, “Always work hard and really give it all of your experience. Always pretend like you are there and inspired or actually be inspired because you never know who’s watching.”

Making up a word

Have you ever heard of “productitian”? Neither had Taylor until she uttered it in her first high-profile interview for ESPN during the Rose Bowl when her nerves took over her brain. We’ve all been there – the brain freezes from nervousness at exactly the wrong moment.  It just doesn’t happen to the rest of us on live national television, much less during one of the most highly watched programs of the year.  Taylor was mortified and believed her career was over before it had hardly started.

At her mother’s insistence though, “I gave it about another 24 hours and realized something else,” she explained. “That if I live by the standard of grace instead of perfection, then I really might be able to accomplish something in life. Because the reality is that we’re all gonna make mistakes. And if I can extend that grace that I’m now going to give to myself to others, then who knows what we can all accomplish together.”

As we all struggle processing 2020 and the “new normal” and the new workplace dynamics, we can all use a lot of grace, for ourselves and each other, including strangers.

Four principles, from Taylor and Matthews

Leaving the graduates with her inspiring family story and career trajectory on this important UGA anniversary, Taylor left the UGA class of 2021 with these “four instructions”: “Speak your truth, live in your purpose, walk in grace, and inspire with your legacy. “

Then she added, “If you are able to aim for those four guideposts and live your life through them and with them in mind, you will be who you’re meant to be. You will make those who love you extremely proud. You will live the life that you absolutely wanna live. And you’ll know that you’ve helped those that will come after you.”

It sounds like Lavonia Matthews’s spirit graduated from UGA at last.