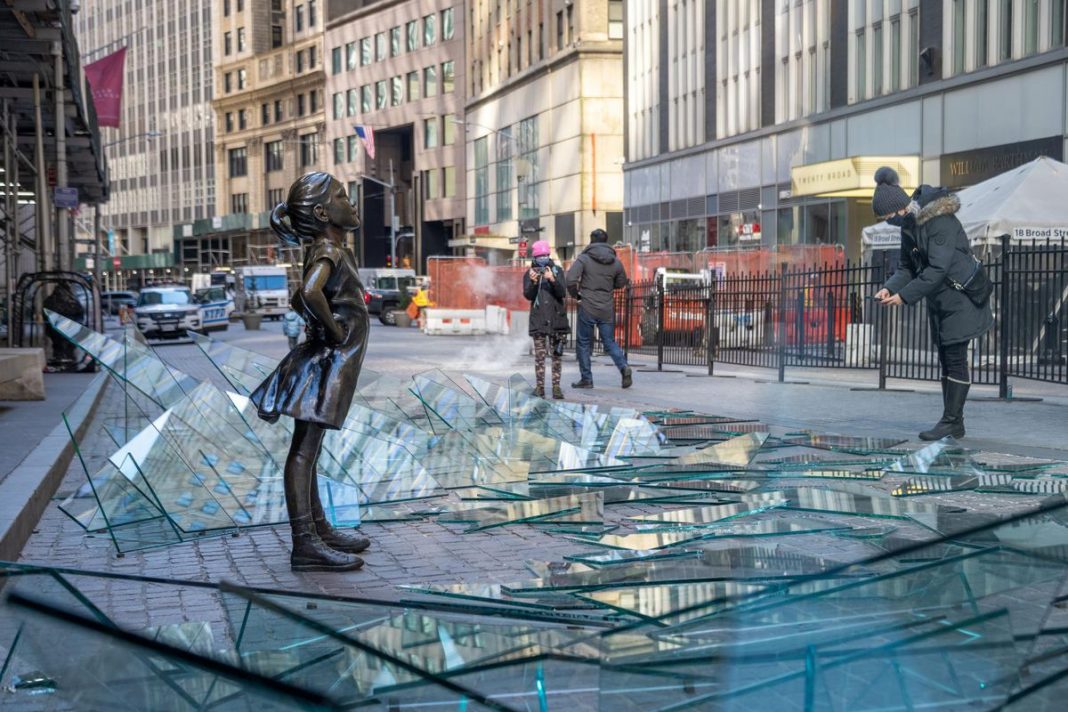 The male-dominated world of finance is touting a serious makeover.

After Jane Fraser in February 2021 became the first woman to lead a major Wall Street bank, other financial institutions have started to display signs that they too might one day soon be helmed by someone other than a white man.

This month, J.P. Morgan announced that it was promoting two female executives – Marianne Lake and Jennifer Piepszak – to jointly lead the consumer and community banking business, its largest division. Elsewhere, Morgan Stanley recently elevated Sharon Yeshaya to the role of chief financial officer from head of investor relations, prompting headlines that glass ceilings were being smashed.

But shifts in the highest echelons of these hulking institutions should not be considered a panacea for problems of systemic inequality that still aggressively permeate lower ranks and smaller banks.

Hephzi Pemberton worked as an analyst at Lehman Brothers until 2008, when it collapsed as the global financial crisis gathered pace. Today, she runs Equality Group, an executive search company and strategic consultancy that she founded in 2018 with the mission of diversifying businesses in the finance and technology industries.

“Of course these promotions of more senior women across the financial services industry are encouraging to see, but we’re still so far off achieving any semblance of gender balance in the industry,” she says.

Pemberton points out that in finance, women’s global representation on executive committees – the highest seniority level – stands at just 20 percent. In the U.S. at J.P Morgan, more than half of the workforce is female but just 28 percent of executive jobs are held by women, which is just one percentage point higher than the proportion in 2019, according to the bank’s own reporting. At Morgan Stanley in the U.S., male senior bankers outnumber their female counterparts by about three to one.

“There is also a lack of discussion about intersectionality and the need for more female role models of color, disability and sexuality to highlight the range of diversity in leadership,” Pemberton says. And she specifically emphasizes the risk of the so-called “leaky pipeline syndrome”. At many of the world’s biggest banks the number of women in the workforce declines by 50 percent or more from graduate level to executive rank.

“There needs to be a focus on why the industry still struggles to retain and promote its talented female professionals,” Pemberton, whose book The Diversity Playbook is due to be published on June 8, says.

Allyson Zimmermann, a coach and executive director at Catalyst, a global non-profit working with CEOs to build workplaces that are more gender diverse, agrees.

“The J.P Morgan and Morgan Stanley appointments are a positive indication of succession planning [but] we’re still a long way off building a sustainable pipeline where women have true parity in the C-suite,” she says. Zimmermann particularly stresses the importance of paying attention to the types – and not just the seniority – of roles that women are entrusted with.

“In North America, women have higher representation in leadership roles that do not typically lead to promotion to CEO, such as heads of talent and marketing and business development,” she explains.

To achieve true parity, women in financial services therefore need to be placed intentionally into what are known as P&L roles – jobs that involve responsibility for the profit and loss of an organization, she adds. It is jobs like these that are held by future CEOs who have the power to effect change from the most prominent perch.

While progress towards a more gender balanced financial services sector was already sluggish before the pandemic, evidence is now emerging that Covid-19 has slowed it to a glacial pace or even halted it altogether.

A survey recently conducted by Accenture, found that 29 percent of women working in financial services had left their job either permanently or temporarily during the pandemic. More than a third of women who had not quit said that they were considering doing so.

One particularly grave finding: almost two thirds of female executives and senior managers, and almost half of entry-level respondents, said that they had become willing to forego compensation for additional flexibility in the workplace.

“When schools and childcare facilities shut, we had no choice but to ask for more flexibility,” says one female banker and mother of two who asked not to be named for fear of being discriminated against or stigmatized for speaking out. “We had to make things work somehow,” she adds. “My boss could theoretically have slashed my salary in half and my hands would’ve been pretty much tied.”

In late May, New York became one of the first major U.S. cities to announce that it would no longer have a remote schooling option from the academic year starting in the Fall, a decision that will allow parents who had been supervising their children’s online classes to return to work physically. But although the move will naturally alleviate the burden on some working mothers, the damage wrought by the pandemic is likely to last.

The U.S. Equal Employment Opportunity Commission has estimated that the gender pay gap could grow by 5 percent due to the pandemic alone, obliterating decades of economic progress for women. A woman in the U.S. currently makes about 82 cents for every dollar paid to a man. It’s worse for women of color, immigrant women and transgender women, but it also widens with education level. Women working in finance tend to be among the most educated.

Sheri Wyatt, a partner within PwC’s Assurance practice who is responsible for executing the firm’s diversity and inclusion strategy within that line of business, is also wary of the potential problems that might arise from hybrid workplace models that some businesses have committed to implementing even beyond the end of the pandemic.

Deutsche Bank, HSBC and investment giant Vanguard are just some of the financial companies that have pledged to allow employees greater flexibility to choose whether they work from the office or not indefinitely. But Wyatt notes that maintaining equality between remote and in-office workers could prove troublesome in the long run.

“There are underlying concerns about how a ‘lack of showing face’ in the office may impact promotions and responsibilities, especially as more women opt in for full-time remote work to have better flexibility and hand in child-care,” she says.

In October 2019, researcher Laura Jones of King’s College London, published a report in which she found that flexible workers – who are predominately women – are frequently marginalized and not granted the same promotion opportunities as men, underscoring Wyatt’s worry.

Overall, Wyatt is also concerned that many financial services companies are still struggling to integrate  diversity and inclusion goals into their broad business strategies.

One survey that PwC recently conducted showed that although 78 percent of financial services organizations have publicly stated “D&I” as a priority, some 37 percent of respondents feel that their individual “diversity” is holding them back from progressing within their organization.

A second mother working at a Wall Street bank, who also asked not to be identified, says that she was considering resigning not because of childcare difficulties, but because the pandemic had proved to be a litmus test for how much she was really valued by her employer.

“There were many times over the last year when I just felt like a cog in a machine, working ridiculously hard under crazy conditions just to make my bosses look good,” she says. “And yes, those bosses are predominantly male.”

“I rarely felt cared for, I rarely felt valued and I rarely felt like my own challenges were of any interest to anyone,” she adds. “Before we address bad workplace culture, gender equality will be nothing more than a distant prospect somewhere far away on the horizon.”