The Fitness Studio Owner Who Hates a Spa Day 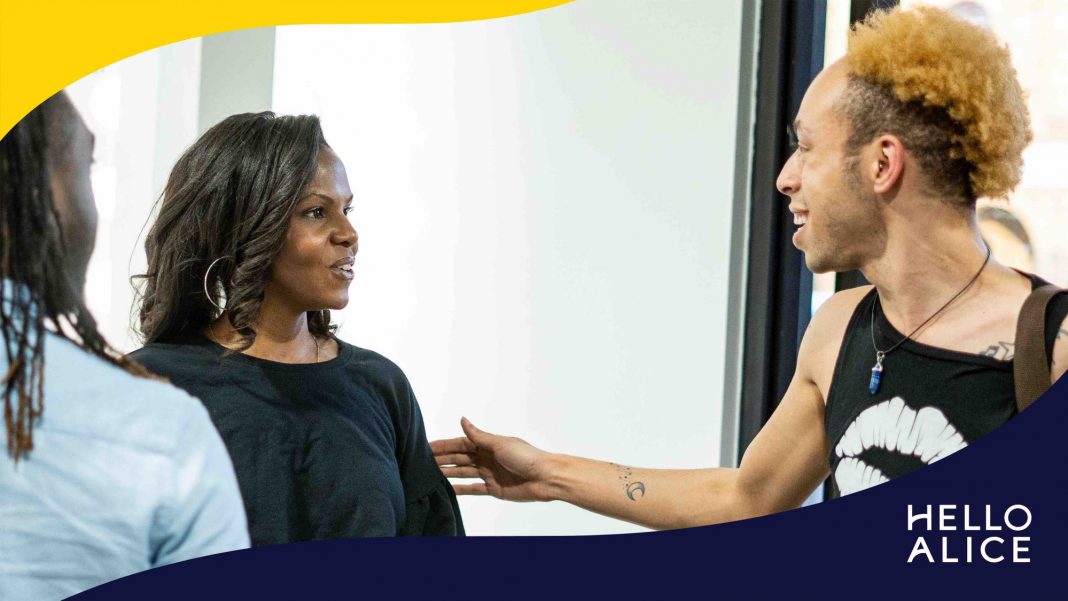 Welcome to “On the Job,” an occasional Hello Alice interview series in which small business owners narrate their entrepreneurial journey.

Nicole Phillips was laid off from her job in private equity on a Monday in 2009. By Friday, she had the idea for Inner Me Studios, her Houston-based company that offers pole dancing, kickboxing, Zumba, and other group fitness classes. Today, Inner Me is consistently ranked among Houston’s top places to work out, and Phillips caters to a loyal clientele at a new location in the city’s Third Ward.

Hello Alice talked with Phillips about her unexpected career change, how she financed the purchase of her historic building, and why doctors love to pole dance. What follows are her own words, lightly edited for length and clarity.

Right after I got laid off, I went home and took a nap. When I woke up, I said, ‘Okay, what am I going to do now?’ It was going to be very tough for me to find a job in finance in 2009 when everyone was getting laid off. I basically knew that I was going to have to move from where I lived in Philadelphia, so I was thinking about the things that I was going to miss. I had just started pole dancing maybe three weeks before, and I remembered telling some of my friends that lived back home in Houston about how much fun I was having. They were interested in taking classes, but at the time, they couldn’t find a place they liked. So I reached out to the owner of the studio that I was attending, and she agreed to meet with me on Friday. I was in private equity at the time, so I was very used to doing due diligence on businesses. I showed up with my checklist, and we went over a lot of questions that I had — the lunch was about three hours long. I walked away from it knowing that I was going to open up my own business in Houston.

We first started in October 2009, and we did a Groupon in March 2010, back when Groupon was popular. Overnight, we got over 700 new customers. It was very overwhelming. That’s when I had to learn about customer service. I think that was a little soon for us to be getting that many people, but we’ve had a drove of customers ever since.

Running a business is very rewarding. It’s a lot of hours, but I was used to a lot of hours. What I wasn’t used to was managing employees. That was a learning curve. I thought, okay, you just hire adults, and then adult people act like adults. That’s not the case. I did have to study, read books, and take some courses. I did the Dale Carnegie course — it’s called How to Win Friends and Influence People. That was very helpful.

I’ve had mentors, and I still talk to them to this day. One mentor who owned a gym stressed the importance of how the business is not for you, it’s for the customer; always listen to the customer, and give them what they want.  I might have not wanted to twerk so much, but that’s what the customer wants! They wanted more dance classes; I wanted more strength training classes.

I will say that pole dancing wasn’t always so popular. When Oprah and Ellen put pole dancing on their show, it was like night and day. People realized that professional women do this all the time. Then there’s the Real Housewives of Whatever City — they’re always pole dancing, too. It definitely helps for people to see that. Now my pole customers are nurses or doctors in the medical field. I think that they like a challenge, which is why someone becomes a doctor in the first place. I also think they’re looking for a way to relieve stress. They’re looking for an experience that allows you to be somebody in the moment that you’re not during your 9-to-5.

After years of renting spaces, I started to pursue my own location and get my own building. I tried to have agents scout for me, but they didn’t seem like they understood the vision that I had. So I was driving around, and I just kept coming to the Third Ward area when I stumbled upon this one building. I loved it immediately. It was so pretty, and it had parking, which is rare when you’re so close to downtown Houston. My yoga teacher is also a real estate attorney, so we reached out to the owners, who were two Black lawyers. They told us the history of the building, that it used to be an unofficial headquarters for the civil rights movement. They had had this building for 28 years, and they wanted to sell it to the right buyer. They were being approached by investors wanting to knock the building down and build townhomes, but they wanted a buyer who would further appreciate the building. I think it was just timing, and they sold it to me.

I bought the building with a big commercial bank, and then I started having some problems with contractors. It actually took me three years to get the building ready, and that bank almost put the building in foreclosure because it wasn’t ready in time. I had to refinance, which is when I found Unity Bank, one of the handful of Black-owned banks in the United States. They became my mortgage lender, and they worked with me to help get it ironed out. They were more willing to help me see the vision versus kicking me out.

I always try to give back. I did SEO, which is Sponsors for Educational Opportunity. It’s a nonprofit based in New York, and one of the things that they do is they help minorities get on Wall Street. That helped me get into investment banking. Without them, I wouldn’t be here. I give them money every single month. We also have our thing called Me Kids. I’ve learned from having this business that we provide customers self esteem, confidence, and friendship. They come here to exercise and to lose weight, but they’re also gaining all of these other things. Adults are great, but it’s important to share that with the kids. For Me Kids, essentially all of the instructors chip in. Every session is a different type of way for the kids to be introduced to working out. They may dance or they may do pilates; the instructors try to make it fun because they know that it’s kids. We also have a social worker — she is our customer as well — and she talks to the kids about things that are going on at home or at school. What’s actually bothering you, and can we talk about it? How can we make it better?

It sounds like a lot of things happening, but I like to be busy. One birthday my friend gave me a pass to The Houstonian Hotel to go to the spa for a day, and I left. I did the first spa treatment, and then I was like, ‘Okay, so what’s next?’ The person tried to tell me that I could relax by the pool and then in an hour I’d learn how to apply makeup or something. I remember thinking, This is too quiet. I’m very bored. I’m going to work. And that’s what I did! I like to work, and it’s fun. When the customers start rolling in, it’s all about them. We’re solving their issues or having conversations with them. I love it.

People hear my story and tell me, ‘I wish I could quit my job!’ And I’m like, I didn’t quit! I was laid off! To this day I don’t know if I would have quit. I’m not quite sure. But I was laid off and decided, you know, what the hell, what else do I have to lose? In the end, I was lucky to be laid off.