To Help End Homelessness In Her City, She Had A Radical Idea: Sue Us 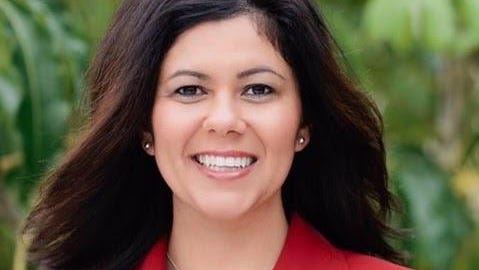 When Michele Martinez saw three cities in Orange County being sued for not providing adequate services for the homeless, she brainstormed a radical idea.

She wanted her city to be sued, too.

It was 2018, and Martinez had been on the Santa Ana City Council for 12 years, the last two of which she’d spent as vice mayor. Now that her term was coming to an end, she’d have to act quickly if her plan was to become a reality. And so, at her urging, Santa Ana City voluntarily entered the lawsuit, leading to a snowball effect with far-reaching consequences. Three years later, an additional two dozen cities have volunteered to be sued, too, culminating in a pivotal moment, as the country’s homelessness crisis finds footing at the federal level.

Martinez herself has managed to become the right-hand woman to Judge David O. Carter, the powerful federal judge who presided over the Orange County case. He has since begun overseeing an unprecedented case in Los Angeles City and County, that could become an example of how to improve homelessness nationwide.

Impressed by her political experience, activism, and fortitude, Judge Carter asked Martinez to come on board as his special master in early 2019, despite that role being typically reserved for lawyers or retired judges. As the special master, Martinez ensures the parties in the LA Alliance For Human Rights (a group of downtown LA business owners and unhoused individuals) vs. the City and County of Los Angeles case follow judicial orders, while also making recommendations to the judge based on her political expertise.

Martinez agreed, and has since been volunteering her time with the court — requesting not to get paid despite putting in countless hours because, she says, “It’s the right thing to do.”

“I said after I left public office I was going to finish this, and that is beyond Orange County, and I’m committed to helping,” Martinez said.

“I’m also a native of Los Angeles, so it was natural to say yes.”

Martinez understands the plight of the homeless from personal experience: she went in and out of homelessness for more than a decade. After her mother went to prison, Martinez spent most of her childhood without stability or a roof over her head. She and her five younger brothers were raised by her 73-year-old great grandmother, who didn’t speak English. Martinez went to nine elementary schools, lived in cars and shacks, and remembers showering with a wet towel in whatever restroom facility the family could find.

At 14, Martinez moved in with her aunt in Santa Ana, a city where she remained for 29 years. Her experiences and hardship pushed her into politics. She wanted to make tangible societal changes, to provide others with the things she didn’t have as a child.

Martinez was elected to the Santa Ana City Council in 2006. Her election was an emotional moment for her entire family — especially for her mother, released from prison years earlier, and her great-grandmother.

“They were profoundly proud of what I accomplished. They never imagined anyone in our family would graduate from high school, go to community college, get a four-year degree and/or ever contribute to society to do good and become a council member,” Martinez said.

“That was the biggest news to my family and people in my neighborhood because people like me don’t make it. We’re not supposed to be giving back. The system was against me.”

At the beginning of her tenure, she focused on other issues in Santa Ana like active transportation, pedestrian safety, health and housing affordability. Although she was interested in improving life for the homeless, typically, she says, the county itself dealt with homelessness, instead of the city — and she was on the city council.

But as the years went on, she watched the homeless situation deteriorate in Santa Ana, partially, she says, because Santa Ana became a dumping ground for other cities to send their homeless. (Articles from as recent as last year show Santa Ana residents believe this problem still exists.)

A lawsuit against the city of Boise, Idaho, also had a significant impact. Martin v. Boise challenged the city’s enforcement of its camping and disorderly conduct ordinances against people experiencing homelessness — those who need to sleep in public in the absence of sufficient housing or shelter. In its 2019 decision, the Ninth Circuit Court of Appeals ruled against Boise, and held that “as long as there is no option of sleeping indoors, the government cannot criminalize indigent homeless people for sleeping outdoors, on public property.”

“I started to do research and realize this is our responsibility. We have to take responsibility. Our residents don’t care who is in charge [whether it’s the county or city] or whose responsibility it is. It’s in our city,” Martinez explained. “So I started working slowly. I tried to figure out the affordable housing, the permanent housing aspect. Not the shelter aspect, because we had a county shelter and other smaller shelters already.”

By 2018, not much had changed. If anything, it got worse, and the amount of constituents calling about the homeless situation skyrocketed.

Soon, Martinez would learn of the Orange County Catholic Workers lawsuit, filed by the Elder Law and Disability Rights Center. The lawsuit filed in January 2018 worked to block the county’s effort to clear homeless people who had set up camp along the Santa Ana River trail and prevent the cities of Anaheim, Costa Mesa, and Orange, in Orange County from enforcing anti-camping, trespassing, and loitering laws. Judge Carter was the federal judge presiding over the case.

As the lawsuit proceeded, Martinez took an unconventional route. She reached out to Carter, researched the case, and concluded it would benefit the city of Santa Ana to enter as a defendant in the lawsuit because it would mean the city was working towards a more humane approach to homelessness. She also noted, by settling in the case, it would protect Santa Ana from possible future lawsuits and allow Santa Ana Police, if need be, to issue ordinances that were currently forbidden because of the Martin vs. Boise case.

But, first, she would need to convince five city council members, and the mayor, that it was the right thing to do. After months of talks and negotiations, she was successful.

Because of Martinez, Santa Ana was the first to settle with the court in this case. As a result, they built the first Santa Ana city shelter for the homeless in just 28 days. They were then required to start following a more thoughtful and compassionate service-oriented approach towards homelessness, including outreach workers to serve as the lead contacts to homeless people. Those outreach workers would offer field screenings, clinical assessments, and appropriate services and placement. The settlement says this assistance will be proposed before sheriff deputies can issue warnings, citations, or arrest homeless people.

Politicians outside of Santa Ana began to notice Martinez’s bold and unique approach to curtailing homelessness. Juan Garza, the former mayor of the City of Bellflower, California, in Los Angeles County, wanted to learn more. He sought Martinez out at a conference to hear her city’s journey. A little over a year later, the City of Bellflower would enter the case as a defendant, too, building a shelter and implementing the more service-oriented regulations required in the settlement.

“I think at the end of the day, we’re all human. And we have a dire situation with homelessness, and it’s growing. We could spend a ton of time figuring out the long-term solution and where the problem stems from,” Garza said. I think if we keep focusing on the long run and the long term, we miss out on helping people that are on the cusp of dying right now.”

“Michele is truly the most special elected official that I have ever met, and she is seismic in her impact. I haven’t seen too many elected officials that are as passionate, as intelligent, and as driven to do the right thing as Michele.”

Other cities, including the city of Whittier, followed suit. To date, more than 20 cities have settled in this case, most that entered voluntarily to be defendants.

Although there was a settlement, the court still plays a role in the case. Judge Carter retained jurisdiction for three years after the settlement in 2019 to hash out grievances and continue to oversee progress. All the while, he now presides over the LA Alliance For Human Rights vs. LA County and City case.

But this time, Martinez is by his side lending a helping hand.

“There are very few virtuous people in the world who do things for all the right reasons. She has no pay, no compensation, and has devoted thousands and thousands of hours as a special master. At a modest rate, she probably has donated a million-and-a-half dollars, minimally, of her time to the case in both Orange County and Los Angeles,” Carter said. “In my order, I said to the city and the county that she needed to start getting compensated as my special master; they came to her, and she turned it down. She’s still doing this for free.”

“Her virtue, ethics, and her belief that homelessness is society’s number one problem right now is admirable. She believes it’s something that’s solvable, and she wants to solve it from a regional approach.”

Since Judge Carter and Martinez began working together, they have visited many homeless sites — including all through the pandemic. Martinez says the two would wake up early and head to places like Skid Row, a 54-block area in downtown Los Angeles that has become synonymous with homelessness and poverty. They also spent their days at encampments and shelters across the county, meeting with homeless advocates, nonprofits, and unhoused people. Listening and hearing the stories of the homeless, and seeing their reality, helped inform the judge’s orders, including his most recent injunction in April, ordering Los Angeles County and the city to put all homeless on skid row into a shelter by the fall.

Both the city and county appealed, bringing the case to the Ninth Circuit Court of Appeals, which has yet to reach a verdict.

While they wait, Carter and Martinez continue to work to improve the lives of the more than 66,000 homeless people in Los Angeles County. Unfortunately, that number continues to rise because of skyrocketing home prices and the Covid-19 pandemic.

But Martinez refuses to rest. She says her job isn’t done until all unhoused individuals are off the streets, receiving the assistance they need.

“We can’t change the global world, but we can do the work that is needed and is in front of us, and we can change ourselves so that we can be of service to the world we live in,” Martinez said.

“We are all fragile, broken people. We are all interconnected. And we all need to heal, trust, communicate, and move towards addressing the needs of the people on the street.”