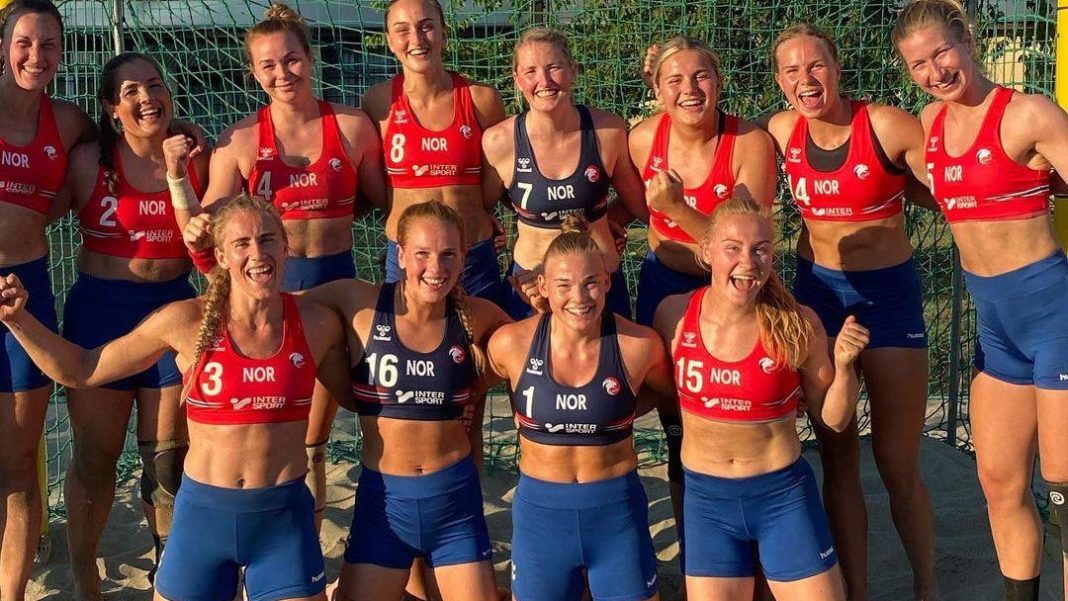 Norway’s women’s beach handball team was fined by the European Handball Federation on Monday, because players wore shorts and not the required bikini bottoms. The choice to cover up with shorts came after their requests to change the bikini bottom rule went unacknowledged. The uniform choice is important not only because it reflects the personal preference of the players, but because research indicates there may be a link between revealing clothing and mental and physical performance.

The International Handball Federation rules stipulate that female athletes must wear bikini bottoms, “with a close fit and cut on an upward angle toward the top of the leg.” Men’s beach handball players have much more flexibility. The men’s rules state, “The players’ shorts, if not too baggy, can be longer but must remain 10 centimeters above the kneecap.” A spokeswoman for the International Handball Federation, Jessica Rockstroh, told the New York Times that she did not know the reason for the rules.

After complaining about the bikini bottom rule for fifteen years, Norway’s female handball team wore shorts for Sunday’s bronze medal game against Spain at the European Beach Handball Championships. As a result of breaking the rules, each Norwegian player was fined 150 euros (about $177). The Norwegian Handball Federation plans to pick up the tab.

It’s particularly important that athletes are able to perform at their peak levels, and research indicates that the self-consciousness that stems from wearing revealing clothing can impact performance (particularly for women). Psychologists call this awareness of one’s own body self-objectification. Girls and women are socialized to think about how other people see their bodies, which in turn can make women more preoccupied with their own physical appearance.

This focus on your own appearance can make your cognitive and physical abilities take a hit. In one study, half of the participants were asked to try on a sweater and the other half a bathing suit. Then, they were asked to solve math problems. Men did equally well in both conditions, but the women wearing the bathing suits performed worse on the math problems than the women wearing sweaters. The researchers explain that the bathing suits made women focus on their physical appearance, which uses mental resources. This left fewer mental resources that could be used for solving the math problems. The researchers claim effect is worse for women because of the “greater cultural demands placed on women to meet physical attractiveness ideals.”

Other research indicates that focusing on your body doesn’t just impact your cognitive abilities, but can impact your physical abilities as well. One study that examined women throwing a ball found that women threw worse after being primed to think about their bodies. Handball players would certainly have reason to be concerned about this impact on their performance.

When it comes to rules about what women can and cannot wear, the Norwegian handball team is not alone in their frustration. From female employees to high schoolers, when it comes to how they cover their bodies, women and girls tend to be more closely scrutinized than their male counterparts. Women are told their clothes are too revealing or not revealing enough.

In the last two weeks alone, in addition to the Norwegian handball team, Paralympian Olivia Breen says an official called her shorts “too short and inappropriate” and the Ukraine Ministry of Defense ruled that female soldiers must march in high heels in an August parade. In order for women to be able to reach parity with men, it’s time to stop creating gendered rules about how women and men should dress while they’re doing their jobs.