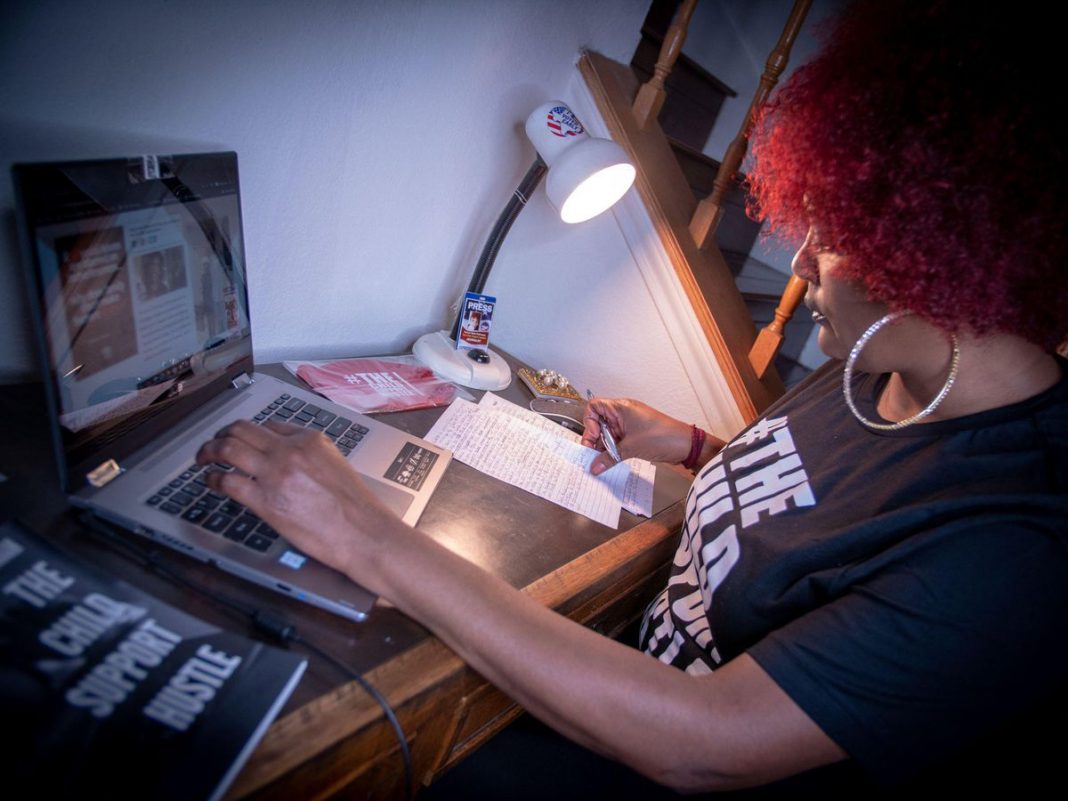 For activist Kenya Rahmaan receiving child support turned her into an activist determined to abolish the child support system. She calls state-ordered Child Support a modern day debtors’ prison. A person who fails to pay child support can have their drivers license, professional license and passport revoked, and be placed in jail indefinitely until they pay arrears. Judges can set a payment on “presumed” income, not what the non-custodial parent is actually making, causing fathers to enter a crushing cycle of incarceration. And if they manage to pay debts, the fines and high interest rates charged are kept by the state, and do not go to the custodial parent.

Rahmaan’s story began as a young mother when she applied for welfare. She had no idea that this would result in one of her ex-partners being sued by the state for child support. However, that child support didn’t go to her, rather the state used it to pay back the money the state spent on welfare. The state kept any money that was above her welfare payment.

“My ex struggled to pay child support and he was incarcerated. I had to appear at his hearing and the judge asked me if I wanted him freed or to remain in jail. I said that I wanted him released,” said Rahmaan. “It was at that moment that I realized that I had too much power over another person simply because we had a child together. I immediately started working on trying to get the case closed. This seemingly simple task ended up taking eight long years to complete.”

The difficult experience in getting the case closed encouraged Rahmaan to learn more how the system works and what can be done to change it. She got her Associates Degree and worked her way up to a Masters in Human Resources. Along the way she immersed herself in child support law and wrote the book The Child Support Hustle which turned into a social media platform and website.

“With the Child Support Hustle I wanted to educate people on how unconstitutional the system was against non-custodial parents, as debtor’s prison was abolished over 100 years ago. I want to teach people how to get orders reduced and debt erased,” said Rahmaan.

Rahmaan, through social media and dozens of town halls, has assisted parents with getting thousands of dollars of fraudulently charged arrears removed from the accounts and getting cases terminated. What motivates her are the children that suffer from the child support system.

“Child support can prevent fathers from being in their kid’s lives,” said Rahmaan. “There are many fathers that reach out to me not understanding why they have to pay child support when they cannot see their child. These fathers are punished, in many instances without due process, when they miss child support payments. However, a mother can refuse any contact or communication between the father and child and face no legal ramifications as courts fail to enforce visitation orders.”

Men can also be proclaimed the biological father even though he is not. In many states, there is a statute of limitations to fight this claim, but many men who are serving in the military, or raising a child who they believe to be theirs, do not contest this claim in time. One of the most notable cases is that against Carnell Alexander.  Without his knowledge he was named as a father of a child on a welfare application. He later proved through DNA testing that he was not the father, but the state of Illinois still expected him to pay over $30,000 in child support arrears as it was after the statute of limitations. Rahmaan filed a complaint with the Federal Office of Child Support Enforcement (OCSE) and the case was subsequently dismissed and all arrears were erased.

“My main complaint is that the child support system is a welfare recovery system,” said Rahmaan. “It penalizes parents for being low-income and more than half of the nation refuses to pass-through the child support collected to those vulnerable families.

The workers routinely ignore even the most basic guidelines, such as the requirement to hold a hearing or offer other safeguards prior to an arrest warrant being issued for contempt of court, and legislators remain silent. That jurisdictions are using debtor prisons in 2021, even after they have been abolished since 1833, is a violation of due process. Non-payment is contempt of court and when a person is held in contempt of court, as it is a civil manner, he or she has no right to counsel. Even though that person can end up in jail.

“If child support is abolished, it should be replaced with an expansion of welfare and the child tax-credit. I support the new proposal under the Biden Administration. Currently, custodial parents must cooperate with child support in order to receive TANF and Medicaid benefits,” said Rahmaan. “The child support system is harmful to children and to fathers and needs to at the least, be deeply reformed, at the most, completely abolished.”