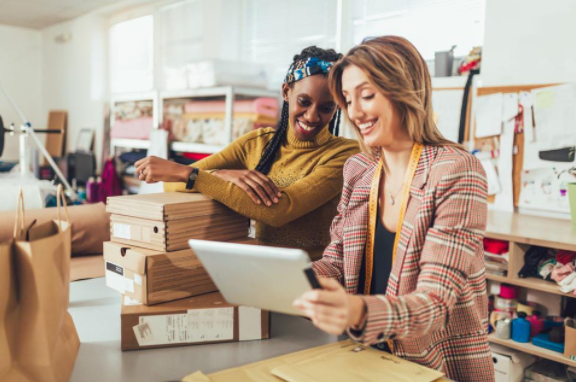 You could describe Padma Lakshmi in many ways.

She is the host, judge and executive producer of Top Chef. She produces Taste the Nation, where she takes viewers around America to enlighten them with immigrant culture and cuisine. And she’s a bestselling author, known for her first children’s book, Tomatoes for Neela.

But Padma, 51, doesn’t only have a large influence in the food space — she also promotes health and wellness all over the world.

At age 13, Padma began experiencing symptoms of endometriosis but wasn’t diagnosed until age 36. Her experiences led her to co-found The Endometriosis Foundation of America (EFA) with advanced gynecological surgeon Dr. Tamer Seckin.

“I didn’t want another generation of women and girls to suffer in silence like I and millions upon millions of people did,” Padma told Professional WOMAN’s Magazine (PWM). “I lost a week of my life every month for 23 years because of this disease. Many doctors didn’t even know how to diagnose it or treat it properly.”

Since its creation in 2009, the foundation has made it a mission to fund research and raise awareness about the disease, and it has helped launch the first Center of Gynepathology Research at the Massachusetts Institute of Technology (MIT).

“I am so immensely proud of all we have accomplished in awareness of the disease, international research and educational programs,” she said. “I have also seen real change in the way the media covers this disease in just one decade. That’s very exciting to me.”

As if Padma couldn’t be any more of a role model, she is also an Artist Ambassador for immigrants’ rights and women’s rights for the American Civil Liberties Union (ACLU) and a Goodwill Ambassador for the United Nations Development Programme (UNDP).

“All the experience and knowledge I gained through starting the EFA with my co-founder has helped me to be a better ambassador for both the ACLU and the UNDP with confidence. Everything I learned at the EFA, I use in my work with these two organizations.”

The activist is also passionate about mental health and advocates for survivors of sexual assault and abuse. At age seven, her life changed forever when she was sexually molested, and then raped at age 16. Padma kept her rape a secret for 30 years, until she wrote an opinion piece for The New York Times titled, “I Was Raped at 16 and I Kept Silent.”

“I wrote an Op-Ed for @nytimes about something terrible that happened to me in my youth, something that happens to young women every day. We all have an opportunity to change the narrative and believe survivors,” Padma wrote on her Twitter page.

Through her piece, Padma wanted to let other survivors know they’re not alone. Her bravery to speak about her trauma serves as an inspiration to survivors of sexual abuse to tell their story and raise awareness.

“Identifying the problem and speaking up about it in a safe space, wherever that is, is the first step to diminishing its power over you,” she said. “Our world is not built for people who want to speak up and do the right thing. There are many systems in place that have not supported our collective well-being or safeguarded a woman’s safety. It can feel lonely and exhausting to speak about any kind of trauma with very little benefit. But in order to free oneself of the yoke of trauma on one’s future, one has to identify the trauma outright and say what happened or what is happening to you out loud. And do not underestimate the help of support groups, even online ones.”

This open-hearted influencer also advises to talk to someone right away, and not just anyone, but someone who is capable of receiving the information you’re about to give them and can help you or help you find help.

“None of us do it alone,” she said. “And to me, the first step is to try and say out loud what is troubling you to someone else. If you can’t find that person right away, then write down everything you can remember think of surrounding what’s troubling you. If the trauma is recent, these details will also be helpful to law enforcement.”

Not surprisingly, Padma’s efforts don’t stop here. She has a laundry list of accolades, including 32 Emmy award nominations, the 2018 Karma award from Variety, the 2016 NECO Ellis Island Medal of Honor and the 2021 Advocate of the Year Award by the United Nations Correspondents Association (UNCA).

In fact, the pioneer also stresses the importance of diversity and inclusion and defends marginalized communities, especially in light of recent injustices against Asians, Asian Americans and Pacific Islanders (AAPIs). Her influence led to another honor — the AI Award from Gold House, a nonprofit that aims to increase AAPI visibility.

Padma strongly believes in food as a vehicle for diversity, and emphasizes that we should be exposed to different foods and ethnicities, advocating that American grocery stores and supermarkets should integrate “ethnic” or “exotic” foods into their “mainstream” aisles.

“I feel integrating things like udon, ramen, tortillas or gochujang and tahini would actually do a lot to normalize these foods and make shoppers who are unfamiliar with them more likely to try them, thereby expanding what more Americans eat. We are a country of many influences. Our stores should look like it.”

The food guru, who is also an ambassador for Impossible Foods, recently became an investor with DAH!, an Indian-inspired yogurt food company.

“Only invest in something you know very well. I felt a great affinity with the DAH! Yogurt brand because I grew up in a house where we made our own yogurt every day,” she said. “Indian cuisine has a millennia-old connection to homemade yogurt that many Westerners may not yet grasp. And, just as the 1980s saw a wave of French yogurt sweep the U.S. consumer with Yoplait, and the 2000s saw the advent of Greek yogurt, I believe the 2020s will be about Indian slow-cultured lassi and yogurt. I look forward to helping bring about this wave in the U.S. because I genuinely think the American eater will benefit from it.”

So, what shaped Padma to be the strong-willed, diversity-seeking, inspirational food enthusiast we love today? To understand Padma, it helps to know her past.

Padma was born in India, and after her mother and father divorced, she came to America with her mother at age four. She grew up in the United States, graduating from Clark University with a Bachelor’s degree in Theatre Arts and American Literature. Padma wasn’t always in the food space — she started her career as a model and actress, working in Europe and the United States. What launched Padma’s modeling career was her seven-inch scar on her right arm — a result of a serious car accident from when she was a teenager.

“I hated it. But then I was, you know, shot by a very great photographer named Helmut Newton. And he liked the scar. I think that your flaws and your scars really make you who you are,” she told CBS News. Padma was dubbed India’s first supermodel.

She kicked off her food career by hosting Padma’s Passport and Planet Food. She’s also a best-selling author, known for book Easy Exotic, cookbook Tangy, Tart, Hot & Sweet, memoir Love, Loss, and What We Ate, The Encyclopedia of Spices & Herbs, and of course, her recent Tomatoes for Neela, which is inspired by her own family memories.

“Through food, my grandmother and my mother taught me so much about life and culture and being a person in the world. And so, I’m hoping that, through this book, I can encourage families to actively cook together, to value the recipes that they’ve been making for their family get-togethers and also to remember all of the different people who bring us our food and to be mindful of our environment,” Padma told The North State Journal.

Padma continues to make memories with her 11-year-old daughter, Krishna, by cooking together in their New York home. This heartwarming mother and daughter bonding time — which consisted of filming “quarantine” cooking videos on TikTok and Instagram — inspired Padma to write Tomatoes for Neela.

“It’s a tale about a mother and daughter who enjoy cooking together, and the story is meant to help children learn about eating seasonal foods, learning to cook and the joy of creating meals together as a family,” Padma told USA Today.

“I think children eat healthier and become more mindful of the planet when they learn about the origins of food,” she says. “One of my earliest memories is making dosas (a traditional South Indian dish of crepes made from fermented rice and lentils) with my mom,” she continued.

Which brings us to Padma’s Emmy-nominated Taste the Nation, an appetizing adventure that sheds light on indigenous cuisine and people and how they’ve shaped American food.

Padma Lakshmi has spiced up our screens, aimed to make a difference one step at a time and raised awareness for different cultural causes. But she’s not done — there’s so much left on this powerhouse’s plate.

If you’re hungry for more Taste the Nation, you won’t be waiting long, as the show has been renewed for a second season.

“Creating this show has been the joy of my life,” Padma said. “But in the time since it’s come out, there already have been a bunch of shows trying to mimic our format and thesis, so I need to make sure our take is always fresh and deeper. That’s the big project until fall when I go to film another season of Top Chef, our 20th!” she said as she wrapped up her interview with PWM.