Most people know that Burning Man, a nine-day-long event in Nevada’s Black Rock Desert that uses artistic self-expression to promote non-commercial community values, originates from a small function organized by American artists and activists Larry Harvey and Jerry James in 1986, when they created the ritual of symbolically burning a large wooden effigy, which has since been referred to as “The Man.” Most people would also know that the event has been held at Black Rock City in northwestern Nevada since 1991, and that it has grown from a 200-person meeting to a celebration that sees the participation of more than 70,000 people today. However, what not many people might know is that this event of such social and cultural significance has been organized solely by women. “Burning Man has always been run by women,” reveals Harley K. Dubois, co-founder and Chief Culture Officer, Burning Man Project. “Men have never run it. There’s a great constellation of the six of us, three men and three women, working together for decision-making, but in terms of how the organization is run, it has been Crimson Rose, Marian Goodell, and I, running it since 1997.”

Dubois spoke to Entrepreneur Middle East in Ras Al Khaimah, UAE, on the sidelines of the 2022 Global Citizen Forum, an annual event staged by the Canadian non-profit organization of the same name, a social action platform focused on improving the world for the future. Dubois said that it was in the 1990s that she -who has been an artistic painter, a fitness coach, and even a San Francisco firefighter at one point in time- worked on organizing Burning Man events as a side job, before fully coming onboard the non-profit organization behind it all, Burning Man Project.

While she is proud to declare that it was her who created “all the infrastructure that a person who comes to Burning Man experiences,” Dubois believes her biggest achievement is the culture of volunteerism that she has instilled in the event. “There’s no paid staff- it’s all volunteers, and it takes 16,762 volunteers to run Burning Man in the desert,” Dubois says. “However, I think that when people give intrinsically, and when they are so passionate about something, they should get something back, and since we can’t pay people, I’m really passionate about meeting their needs, and getting them training.”

It is with that thought in mind that Dubois started an internal Burning Man leadership training program that also embeds facets of her personal leadership style. She explains, “How do you get chaos [creators] and anarchists to do anything? You have to let them be a part of the process, and that takes a very soft but persistent leadership style that we are known for.” Dubois also believes in learning about her volunteers’ strengths and weaknesses, and putting them to good use. “Some of our biggest critics have become our best community members,” she explains. “I remember this one guy, who was really complaining that we were doing everything wrong, and so, we asked him if he would answer our complaints at Burning Man, and he loved it. He did it for like 10 or 15 years- we just flipped it, and let him become a part of helping us to fix it.” In the years since its inception, Burning Man has turned into a hotspot for cash-heavy celebrities and CEOs, which has also led it to be criticized for attracting ultra-wealthy burners who fly in private jets, stay in luxurious camps, or employ private chefs at what was meant to be an experience of an authentic self-sufficient community, and not a display of status and privilege.

When I asked Dubois for her thoughts about this critique, I was surprised to see that she had no prepared PR spin to respond to it, and instead remained honest and authentic while answering. “I think it’s one of our biggest problems,” Dubois admits. “There are some people that are doing camps which we would call a plug-and-play camp, and it’s really well-funded, and so, they just show up, and live in their bubble of luxury. On the other side, there’s one gentleman who rents private jets, and flies in musicians who, in the United States, don’t get paid enough, and they would never be able to come to Burning Man, and so it turns out to be a gift for them, and that guy is on the high, good end of the spectrum.” But who then is on the lower end of the spectrum? “You get somebody who doesn’t understand what Burning Man is, and they’re doing it only because they think it’s the cool thing to do,” Dubois replies. “Those people come to our event, but they have no idea how to be a citizen. They have no idea what we’re doing there, and they become insular in their own camps. That’s bad. But there’s a spectrum in between, and there’s a way to teach people. Just because you did it wrong once, it doesn’t mean that you’re a bad person, so maybe, there is a way for you really to become a part of Burning Man.” 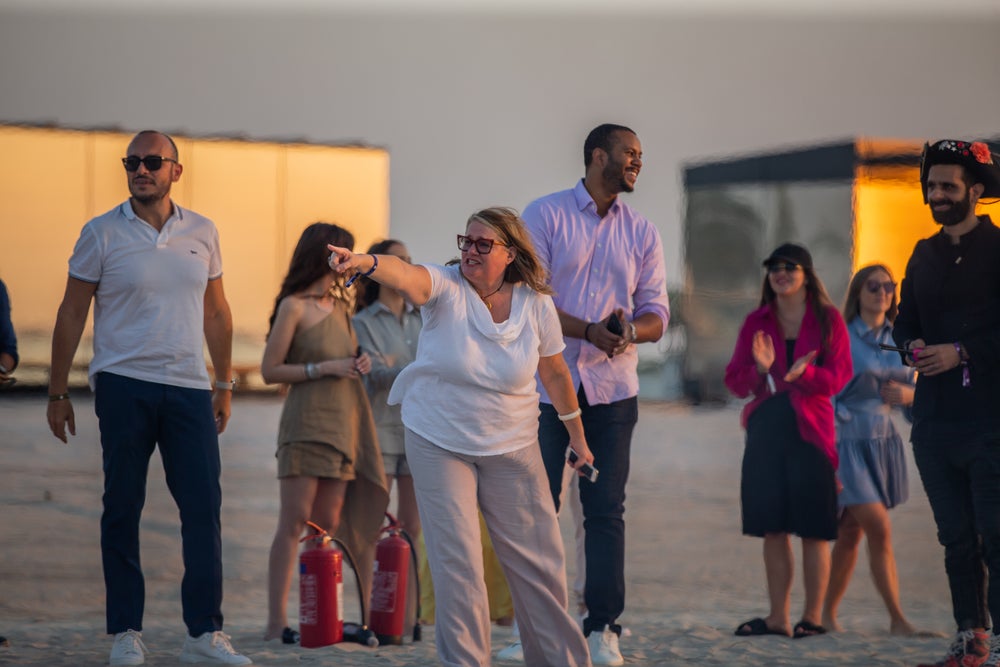 Dubois’ mindset also offers an insight into how Burning Man has kept its appeal over the years of its existence- according to her, the event is all about “changing the game on how to live your life for one week.” Dubois adds, “When you experience that, it’s addictive. It’s not about money or power or status, but about who you are, and what you value, and how you can contribute to others. When you get a taste of that, it’s hard to want to go back.”

Dubois is referring here to the impact of Burning Man’s 10 Principles authored by its co-founder and Chief Philosophic Officer Larry Harvey, which have since been taken by several attendees of the event to their local communities around the world. These principles are thus meant to ensure that the underlying concept behind Burning Man grows into a global cultural movement. When asked about the supervision of those regional events, Dubois explains that the Burning Man community has its own innate checks and balances. “Our community is really, really, really good at being vocal,” she says. “They come to us and say, ‘Hey, they’re not doing it right. Please check it in.'”

And while its regional event network is building itself up, Burning Man is also in the process of setting up its 2023 edition, for which, Dubois says, the theme is “Animalia,” and that it will aim to celebrate the animal world and people’s place in it. “I think we need to lighten up a little bit, like, come to Burning Man, and just laugh, so I think we’ll have a great turnout,” she adds.

Given her many years of experience of running an event of the size and significance of Burning Man, Dubois can obviously share plenty of advice for other achieving women out there. For instance, for those of you running businesses, Dubois says that it’s imperative that you have established the right decision-making process within your ventures. “There’s a whole process for decision-making that we use within our fire department at Burning Man, and that is to have one person who is the meta decision-maker, and who makes the decision in the moment,” Dubois says. “After the event is over, you have to analyze that and see if there were any mistakes. But for that moment, if it’s an emergency, you just have to move quickly, and that is why the more chaotic it gets, the calmer I get.” Dubois then continues her advice for women by telling them to remember to stand their ground with generosity and kindness, and to come at things with a sense of inquiry, rather than accusations. Plus, if you’re a woman, and you want men to hear you, “simply, lower your voice,” Dubois adds, with a smile.