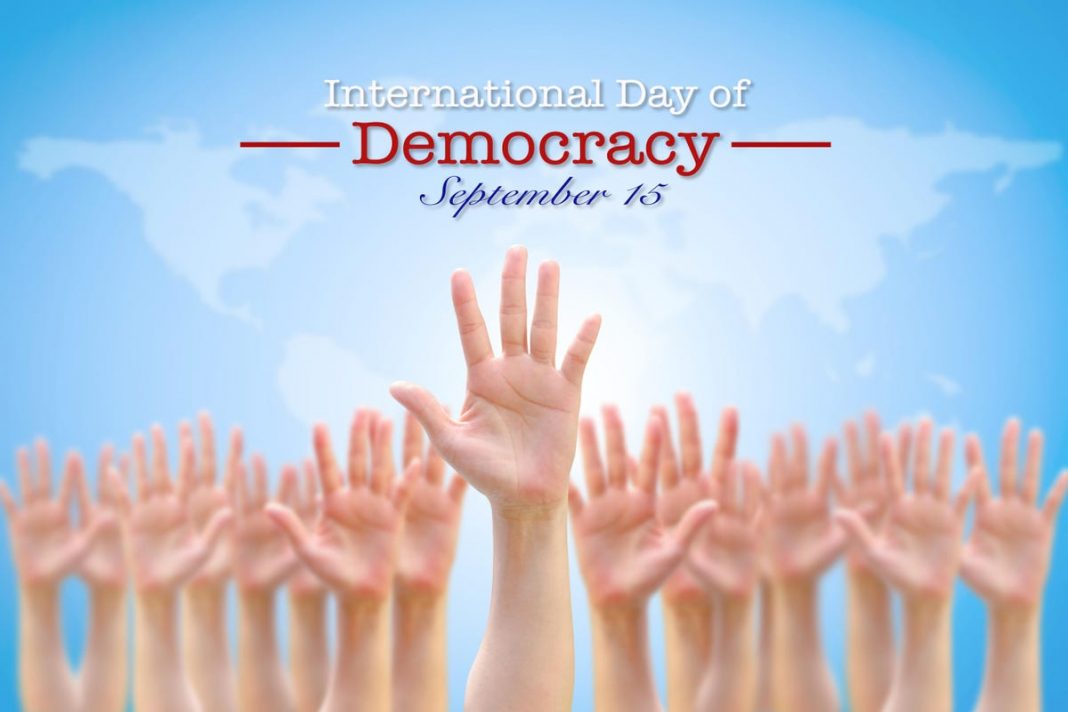 In 2017, the UN General Assembly resolved to mark September 15 as the International Day of Democracy tasking its member states with “promoting and upholding the principles of democracy” and inviting them to “commemorate the day in an appropriate manner that contributes to raising public awareness.”

The world’s first known democracy came about in 507 B.C., when Cleisthenes, an Athenian leader, introduced a system of political reforms he referred to as demokratia – “rule by the people.” It is derived from demos, “the people,” and kratos, “power.”

This June, over 100 faculty members from universities nationwide signed the “Statement of Concern” on the serious threats to the “electoral pillars of American democracy” calling for “urgent corrective federal legislative action.”

The annual country-by-country assessment of political rights and civil liberties released by Freedom House, Freedom in the World 2021, confirms the “authoritarian actors grew bolder during 2020 as major democracies turned inward, contributing to the 15th consecutive year of decline in global freedom.”  Some 73 countries, representing 75% of our global population, received downgraded freedom scores, including not “just authoritarian states like China, Belarus, and Venezuela, but also troubled democracies like the United States and India.”

Quotes On Democracy To Behold

“The capacity to combine commitment with skepticism is essential to democracy.” –Mary Catherine Bateson, cultural anthropologist author of groundbreaking books on women’s lives and the daughter of Margaret Mead

“The best way to enhance freedom in other lands is to demonstrate here that our democratic system is worthy of emulation.” – Jimmy Carter, 39th U.S. president

“For a democracy to be truly alive, vital, and revolutionary, for it to rise beyond abstraction and mere symbolism, for it to become a throbbing head-and-heart-felt presence in our lives, we need to make it personal.” – Laurie Lane-Zucker, ‎Founder & CEO at Impact Entrepreneur Center

The most common way people give up their power is by thinking they don’t have any.” – Alice Malsenior Tallulah-Kate Walker, American novelist, short story writer, poet, social activist who in 1982 became the first African American woman to win the Pulitzer Prize for Fiction for her The Color Purple.

“A state that denies its citizens their basic rights becomes a danger to its neighbors as well: internal arbitrary rule will be reflected in arbitrary external relations. The suppression of public opinion, the abolition of public competition for power and its public exercise opens the way for the state power to arm itself in any way it sees fit. … A state that does not hesitate to lie to its own people will not hesitate to lie to other states.” – Václav Havel, former president of the Czech Republic

“Without general elections, without unrestricted freedom of press and assembly, without a free struggle of opinion, life dies out in every public institution, becomes a mere semblance of life, in which only the bureaucracy remains as the active element. Public life gradually falls asleep.” – Rosa Luxemburg, Jewish Marxist economist, anti-war activist and revolutionary socialist of German and Polish nationality.

“Democracy is never a final achievement. It is a call to an untiring effort.” – John F. Kennedy, 35th U.S. President.

“Never doubt that a small group of thoughtful, committed citizens can change the world. Indeed, it is the only thing that ever has.” – Margaret Mead, American cultural anthropologist.

“We must learn to judge our social and economic choices by whether they empower the powerless, protect the earth, and foster true democracy.” – Jim Wallis, the founding editor of Sojourners magazine, in his book The Soul of Politics.

“Protest beyond the law is not a departure from democracy; it is absolutely essential to it.” – Howard Zinn, American historian, playwright, philosopher, socialist thinker, World War II veteran.

“A great democracy has got to be progressive, or it will soon cease to be great or a democracy.” – Theodore Roosevelt, 26th U.S. President.

“For me, a better democracy is a democracy where women do not only have the right to vote and to elect but to be elected.” – Michelle Bachelet, head of UN Women, former president, and defense minister of Chile, in The New York Times.

“The death of democracy is not likely to be an assassination from ambush. It will be a slow extinction from apathy, indifference, and undernourishment.” – Robert Hutchins, American educational philosopher.